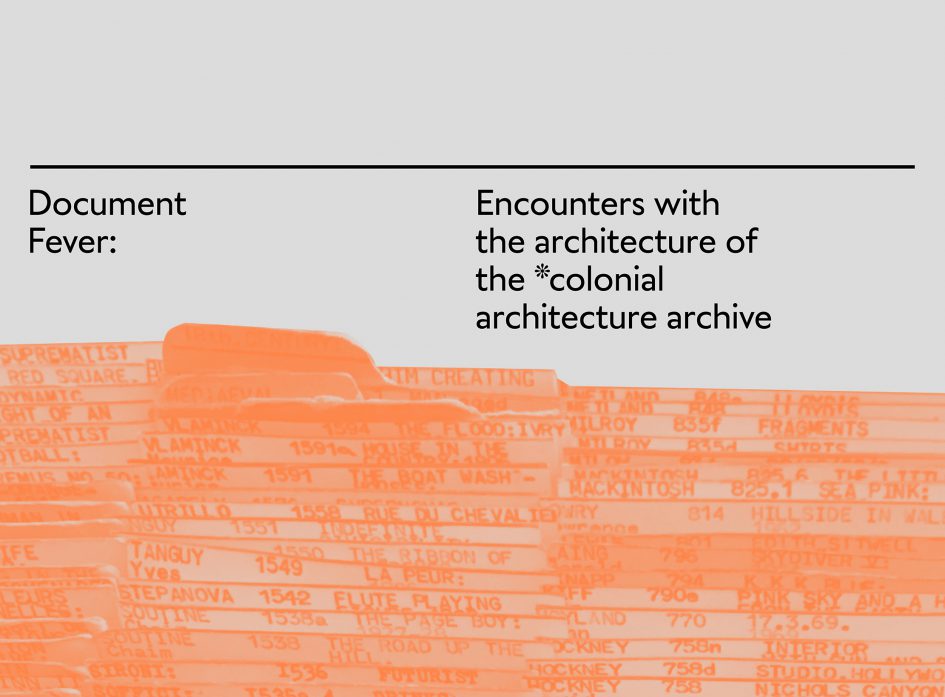 This symposium has been organised by the Architectural Association (AA) in collaboration with ASSC, and has been convened by Albert Brenchat-Aguilar.

Fever: An intense enthusiasm for or interest in a person, pastime, event, etc., typically widespread but short-lived; an obsession, a craze / A state of intense nervous excitement or agitation / to elevate in intensity, temperature, etc., to heighten emotionally. OED

An architectural archive is expected to contain drawings, plans, maps, photographs, models, and sample materials. However, the archives of post-war architects working for the United Nations — Jacky Tyrwhitt, Charles Abrams, or Otto Koenigsberger, to name a few — contain letters, invoices, book drafts, repetitive lecture notes, photographs, press cuttings, and, mostly, reports, piles of them. Reports consist of from two to dozens of typed pages with advice on the development of the environment as a whole, spanning issues such as landscape, ecology, economy, housing, migration, labour, water management, and others. These reports are mostly addressed at regions in Africa, Latin America, and South and Southeast Asia that were colonised at the time or had recently gained independence.

It is common to find report-based archives in Western departments of architecture and architectural institutions. Both the architectural category and the Western homes of these archives could be questioned for their interdisciplinary content and their embodiment of neo/post/post-/re/trans/inter/—/*colonial relations. These probably get complicated by other questions: the exiled condition of some of its authors, the aspirations of the UN and of the recipients of these reports, or the political and economic international dynamics behind these reports. Maybe one first question is about what these archives represent: is it their authors, their ideas and practices, their network, the lands and peoples reported, or something other?

This symposium adds to the work on *colonial networks of planning consultants since the 2000s and specifically to the work from critical studies and the social sciences developed in the 2010s on *colonial exchanges between Argentina, Brazil, Mexico, US, UK, Nigeria, South Africa, Singapore, The Philippines, Indonesia, India, Pakistan, Kuwait, Iran, Iraq, Ghana, Germany, Poland, Romania, and Belgium. This work has until now scrutinised these archives through theses on climate and race, capitalism and extraction, green infrastructure, socialist worldmaking, and misogynist endurances, amongst others. None of these topics were explicit in the archives which are partial, unclassified, and under rigorous custodianship most of the times. This symposium focusses on the feverish encounter with the architecture of the archive that made possible these forms of research and asks how to make ‘privilegings, elisions, and silencing’ of the ‘work of the archive’ present, accessible, and suggestive, if at all appropriate, in the architectural *colonial archive?

11.15am | Welcome and introductions

Shirley Surya (Curator, M+)
Expanding notions of the “Colonial” through the Archives of BEP Akitek and AT3

The activity of institutional collecting is neither a science nor pure art. It is a result of a focused set of inquiries and interests as much as it is of serendipities. As a museum for visual culture encompassing visual art, design and architecture, and moving image based in Hong Kong, M+ has sought to build its architectural collections since 2013 with a focus on representing key players and narratives of architectural production in Hong Kong and across Asia, through a transnational framework. Post-colonial developments was a clear priority as it was a condition unique to many parts of Asia, in particular South and Southeast Asia, especially as a museum committed to the region of Asia. With the dearth in literature on the topic and little practice of conserving archives, existing leads and personal favour still enabled us to acquire the archives of BEK Akitek (formerly Booty, Edwards and Partners) and Architects Team 3 (formerly Malayan Architects Co-partnership). These practices have been historicised to be formative in shaping the architectural and urban developments of former British Malaya, and later post-independent Malaysia and Singapore. The nature of these highly fragmented archives, however, expanded or complicated existing notions of post-colonial nation-building, particularly in terms of the agency of “colonial” versus “national” architects, as well as how the “local” and “regional” is interpreted and manifested.

Public archive repositories in Ghana offer opportunities for original research into colonial exchanges and architectural heritage. However, several challenges arise when using these spaces. In this paper, I will share some of the emotions sparked in academics, practitioners, and curators as they share their varied experiences – including frustrations, delights, and surprises in accessing archival materials in Ghana’s public, private and traditional institutions. It will also highlight on the rewarding moments and opportunities if one is patient enough to search.

This paper will examine a category of documents ubiquitous to 20thC archives – the humble index card…  Specifically, I would like to focus upon the card catalogue of the Architectural Association’s Lantern Slide Collection. International in scope, the collection forms one of the most important surviving holdings of architectural lantern slides in the UK and was at the heart of teaching within the AA from the 1920s to the 1960s. It also had a broader role as a hub for the distribution of slides to the RIBA, the Bartlett, the Courtauld Institute and to schools across the UK- including Cambridge, Birmingham and Aberdeen. Remarkably, the initial classification system was drawn up by the AA Principal, Howard Robertson, and survives largely intact today, together with provenance records and the original physical arrangement of the slides. This paper will attempt to read this archival system, from the index card up, with a view to providing an insight into the linguistic and hierarchical structures underpinning the catalogue and the means by which the archive was complicit in constructing and transmitting architectural ‘knowledge’ – at a time when the AA was billing itself as ‘the premier school of the Empire’.

There is a need to carefully understand the political challenges and turmoil during a period of nation-building and aggressive urban renewal in Singapore, because the available accounts were mostly narrated by the state. As far as mainstream narratives go, the modernisation of the city was portrayed as a seamless process with no adverse relationships to race conflicts, social upheavals, inequality or political motives. Therefore it is imperative to examine sources outside of the nation state apparatus, in this particular case, the United Nations Archives, Charles Abrams Papers and Files at Cornell University Library, Otto Koenigsberger Archive at the AA, Jaqueline Tyrwhitt Papers at RIBA, and the visions and feasibility studies of the architects, students and design studios involved in the visualisation of the buildings. Many of these processes occurred in parallel within their theoretical bubbles. This presentation will use the five schemes produced for the Golden Mile District to illustrate how the contestation of ideas revealed the possibilities for a better city.

Oversized hostile suns illustrate some reports, manuals, and publications in the archive of the Architectural Association’s Department of Tropical Studies (DTS). In this paper, I address the location of these suns as spaces to decolonize the archive with the many architectural ecological conceptions coexisting in the DTS’s environment. Containing, mostly, piles of typed planning reports for the United Nations, the archive of prominent postwar international planners hides the labour of actors that formed the aesthetics of the archive: the typist, the administrator, the receiver of the report, the graphic designer and layout artist, the book binder, the translator, etc. Marks by these actors are points of departure to multifaceted architectural histories that no unilateral archive can cope with. In this presentation, my approach to the DTS archive will be filtered by the aesthetic histories of Avinash Chandra’s paintings and exhibition catalogues, particularly the missing catalogue of his exhibition at the Architectural Association. In the late 1950s, Chandra continued his artistic career in London whilst a promoter of his work was handing over the direction of the DTS to Otto Koenigsberger, who would lead the institution for decades. Chandra’s representation of landscapes and of himself in the early 1960s depict complex international ecologies that shed light on aesthetic discriminations present in the DTS.

Shivani Shedde (PhD student Architectural History, Princeton)
Limits to Solidarity: Reading the language of development against the language of liberation in the Afro-Asian Project

The October 1970 issue of the journal Lotus: Afro-Asian Writings contains an article by Mulk Raj Anand, the founder and editor of MARG, the Bombay-based art and architecture magazine. In it, he writes about the emergence of a comprehensive international movement of art and architecture that responds to a “new historical humanism.” Partaking in the “insights from the whole human heritage,” he writes, “lies the attempt of the peoples in the ex-colonial countries” to “adopt to contemporary living.”

In response to the symposium title “Document Fever” this paper would like to ruminate on the possibilities unleashed by reading with and against the language of solidarity in the vast but partial archives of Afro-Asia, and asks, how do rhetorical commitments to a futurity embodied by anti-colonialist statements in journals like Lotus and Marg affect architectural practice, if at all?

To begin to answer this question, this paper explores how discursive practices of architecture and technical cooperation were meant to fulfil the ideological statutes of the Afro-Asian solidarity project, and yet the subsequent language of development meant that the universal goals of historical humanism were splintered by the categorization of who and what needed to be modernized.

How to account for documents of regional planning that in the postwar era increasingly abandoned their traditional tools of visualization and focused instead on textual reports? As this paper will argue, the emphasis on textual description is symptomatic to a turn from plan as a blueprint for the future to planning as an ongoing process, most explicitly expressed in the fuzzy figure of the region. By considering international planning teams’ reports on Singapore, Sierra Leone and Tanzania in the 1960s-1970s, this paper will highlight the challenges these documents present to the architectural historian, and the uncertain archives they create.

Mark Crinson (Prof. Architectural History, Birkbeck)
My Village: Organising the world, and the archive as auto-colonialism

In this paper I will address the conceptual structure of a particular kind of archive. The Percy Johnson-Marshall Collection, held by the University of Edinburgh, contains the papers of a prominent architect-planner and international consultant of the post-war decades. Although much of the archive could not be described as colonial as it contains papers relating to architectural practice and teaching in Britain, there is also much that can be. Johnson-Marshall was not just born into a colonial civil servant environment in India (and later, Iraq), was an active organiser of planning and pedagogic projects in India and Burma immediately after the war, and later became a planning consultant in various late colonial and post-colonial settings, it might also be argued that his attitude towards the work of the welfare state was significantly formed by his colonial background and, often, his reactions against that background. I want to explore how we can draw out the deeper conceptual structure of the archive and to do this I will be comparing it, using the device of the ‘semiotic square’, with the function of the archive in the Todd Haynes directed legal thriller Dark Waters (2019), also – arguably – a colonial archive. Finally, I will focus on one set of papers in the Johnson-Marshall Collection, that on ‘My Village’. Here, in this pedagogic project for Indian soldiers returning home after wartime service, we can see how the themes of organisation and disorganisation (the good and the bad village in colonial India) are specific articulations of the larger epistemology of the archive.

Sabelo J. Ndlovu-Gatsheni (Professor and Chair of Epistemologies of the Global South with Emphasis on Africa at the University of Bayreuth in Germany)
The Decolonial Turns in the African Archive.