Historian Andreas Killen on the history of the brain at the start of the Cold War.

The middle of the 20th century was a watershed moment in the history of brain science. New technologies like the EEG (a method for reading brainwaves) encouraged clinicians and researchers in the belief that they stood at the threshold of epochal developments in the understanding of epilepsy, memory, learning, perception, and hallucination. Such developments were celebrated in works like the Anglo-American neurophysiologist Grey Walter’s The Living Brain (1953).

The power of new mid-century technologies and understandings of the brain is captured in a photo, which appeared in the New York Times at the beginning of the 1950s, of Einstein hooked up to an EEG whilst he is asked to think about relativity. Einstein’s brain, as Roland Barthes wrote in his book Mythologies (1957), became a quintessentially mythological object of the modern age

At the same time, new understandings and representations of the brain became part of the political and cultural history of the period. Amid the circumstances of the early Cold War, the dream of a revolutionary new science of brain and behaviour took on notably dark features. This is illustrated, for instance, by the history of research into sensory deprivation, which first took shape in the lab of Canadian neuropsychologist Donald Hebb and then went on to become central to Western research into Communist interrogation practices.

The following talk, given to the Richardson Seminar on the History of Psychiatry, takes the sensory deprivation work, first of Hebb and then of John Lilly, as exemplary of a strand of research that, during the 1950s, continually tracked back and forth between scientific and Cold War contexts. It also shows how these developments played out against the backdrop of the negotiations that occurred between mid-century brain science and the scientific legacies of figures like Pavlov and Freud. 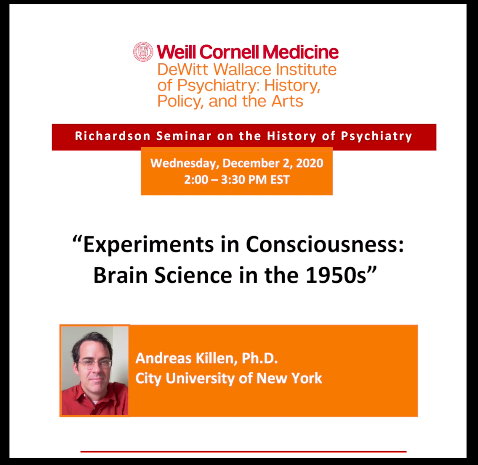