Contact details, research information, and publications can be found at my departmental webpage here. Information about the Centre for Educational Neuroscience, of which I am currently director, can be found here.

The cognitive system is remarkably complicated. The human mind appears very sophisticated compared to many animals – sometimes we do things better, sometimes differently. (Let’s ignore the bit where the animals are cleverer. I’m trying to be upbeat about humans, here. I’ve no idea how birds migrate using the Earth’s magnetic field or how bees hover on a windy day). Yet humans share the vast proportion of our genes with many other species. Where does the complex structure of the human cognitive system come from? How do genes influence its construction differently from our animal cousins? How much does the mind’s detailed structure rely on genetic instructions to build specific brain mechanisms versus an instruction just to build general computational power (and let learning do the rest)? How much does the structure of the human mind rely on the intricately layered cultural environment in which we are brought up? What is responsible for the change in performance we see as children get older? What can give two children or adults of the same age different cognitive abilities? What can go wrong in the construction of the mind? All these questions drive my research. One of my main research methods is building computational models of human cognition: I want to see processes of cognitive development happening in formal, concrete simulations. As Kevin Costner’s character is told in the Hollywood movie, Field of Dreams, “Build it and they will come.” Kevin replies, “Who will come?”

I’ve no idea either, Kevin.

Biog: I studied Psychology at the University of Exeter from 1987-1990, gaining a BSc(Hons.) degree, and completed an MSc in Cognitive Science at the University of Birmingham in 1991-1992, where my masters thesis was supervised by Prof. Glyn Humphreys. I then moved to the University of Oxford from 1992-1995, where I completed a D.Phil in Experimental Psychology under the supervision of Prof. Kim Plunkett and Prof. Alan Allport. My thesis explored the acquisition and functioning of the bilingual lexicon using empirical and computational methods. Between 1995 and 1998, I lectured at the University of Winchester, until joining Prof. Annette Karmiloff-Smith’s research lab at the Institute of Child Health as a research fellow. I joined Birkbeck College in 2002, and I am currently a Professor of Cognitive Neuroscience. I established the Developmental Neurocognition Laboratory in 2003, within Birkbeck’s world-leading Centre for Brain and Cognitive Development. The focus of my laboratory is to use multi-disciplinary methods to understand the brain and cognitive bases of cognitive variability. In 2006, the lab was the co-recipient of the Queen’s Anniversary Prize for Higher Education. In 2010, I became Director of the Centre for Educational Neuroscience, a tri-institutional research centre which aims to further translational research between neuroscience and education, and establish new transdisciplinary accounts in the learning sciences. I am a Chartered Psychologist, Fellow of the British Psychological Society, Fellow of the American Psychological Society, and Senior Fellow of the Higher Education Academy. Sometimes I have been called Fred. Here’s why. I’m married with twin sons.

I’m a big fan of fencing. Here, I’m on piste attacking the man in dark trousers. 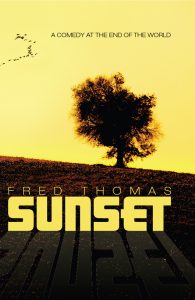 I jotted down a novel. It’s called Sunset, a sort of comedy science fiction thing about the end of the world, for people who like Douglas Adams or Terry Pratchett. Sunset is available as a real book or an electronic one, and here’s a blog ruminating on its contents. (The boy has too much free time, you’re saying to yourself. I surely did, once. Till the twins came along.)

Thomas, M.S.C. and Stone, A. (1998). Cognitive connectionist models are just models, and connectionism is a progressive research programme. Commentary on Green on Connectionist Explanation. Psycoloquy, 36. HTML

Thomas, M. S. C., Mareschal, D., & Hinds, A. (2001). A connectionist account of the emergence of the literal-metaphorical-anomalous distinction in young children. Proceedings of the 23rd Annual Meeting of the Cognitive Science Society. Erlbaum. PDF (90 k)

Thomas, M.S.C. and Mareschal, D. (1996). A connectionist model of Metaphor by Pattern Completion. In Proceedings of the 18th Annual Conference of the Cognitive Science Society. Erlbaum. Pp. 696-701.Computational models of consciousness:

Any cookies that may not be particularly necessary for the website to function and is used specifically to collect user personal data via analytics, ads, other embedded contents are termed as non-necessary cookies. It is mandatory to procure user consent prior to running these cookies on your website.