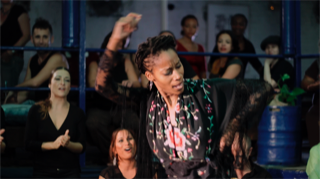 This is an internationally acclaimed documentary on the hidden history of African slavery in Spain and the cultural relevance of Africa for flamenco and Spanish culture.  The film prominently features Yinka Esi Graves, a flamenco dancer of African descent.  Showing will be followed by discussion (Q&A) with the Spanish director Miguel Ángel Rosales, flamenco dancer Yinka Esi Graves and Carmen Fracchia, Professor in Hispanic Art History (CILAVS).

Miguel Ángel Rosales is a Spanish anthropologist and documentary filmmaker. His contact with cinema began at a very young age following his father across the South of Spain projecting films in local cinemas. Miguel Ángel studied at the Conservatory of Music in Granada and later directed musical, theatrical and audiovisual projects. Gurumbé is his first feature film.

Yinka Esi Graves is featured in Gurumbé. She is a London-born Flamenco dancer and now resides in Seville. She performs across Europe and the Americas telling her story of Africa in Flamenco.

Carmen Fracchia is a Professor of Hispanic Art History in the School of Arts at Birkbeck University of London. Her recent book Black but human: slavery and visual arts in Hapsburg Spain, 1480-1700. Oxford, UK: Oxford University Press, 2019 addresses the visual representation of the articulation of human diversity, ‘blackness’, slavery, freedom, subjectivity, agency, self-representation and religion in early modern Spain.